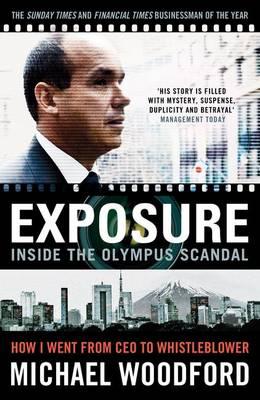 Exposure: From President to Whistleblower at Olympus

"It was no comfort to know that I was making history, for the forced removal of a company president is almost unheard of in Japan. I rose quietly, left the room, and holding my head high, walked back to my office. My main goal was to escape as quickly as pos-sible. The board had seemed scared--why else would they have acted the way they did. But just what were they scared of?" When Michael Woodford was made president of Olympus--the company to which he had dedi-cated thirty years of his career--he became the first Westerner ever to climb the ranks of one of Japan's corporate giants. Some wondered at the appointment--how could a "gaijin "who didn't even speak Japanese understand how to run a Japanese company? But within months Wood-ford had gained the confidence of most of his colleagues and shareholders. Unfortunately, soon after, his dream job turned into a nightmare. The trouble began when Woodford learned about a series of bizarre mergers and aquisi-tions deals totaling $1.7 billion--a scandal that threatened to bring down the entire company if exposed. He turned to his fellow executives-- including the chairman who had promoted him Tsuyoshi Kikukawa--for answers. But instead of being heralded as a hero for trying to save the company, Woodford was met with vague responses and hostility--a clear sign of a cover up. Undeterred, he demanded to be made CEO so he could have more leverage with his board and continue to search for the truth. Then, just weeks after being granted the top title, he was fired in a boardroom coup that shocked Japan and the business world at large. Worried his for-mer bosses might try to silence him, Woodford immediately fled the country in fear of his life and went straight to the press--making him the first CEO of a global multinational to blow the whistle on his "own company." Following his dismissal, Woodford faced months of agonizing pressure that at times threatened his health and his family life. But instead of suc-cumbing he persisted, and eventually the men who had ousted him were held to account. Now, Woodford recounts his almost unbelievable true story--from the e-mail that first alerted him to the scandal, to the terrifying rumors of involve-ment with the Japanese mafia, to the stream of fruitless denials that continued to emanate from Olympus in an effort to cover up the scandal. He also paints a devastating portrait of corporate Japan--an insular, hierarchy-driven culture that prefers maintaining the status quo to exposing ugly truths. The result is a deeply personal memoir that reads like a thriller narrative. As Woodford puts it, "I thought I was going to run a health-care and consumer electronics company, but found I had walked into a John Grisham novel."

Title: Exposure: From President to Whistleblower at Olympus

Description: Ships from UK in 48 hours or less (usually same day). Your purchase helps support the African Children's Educational Trust (A-CET). Ex-library, so some stamps and wear, but in good overall condition. 100% money back guarantee. We are a world class secondhand bookstore based in Hertfordshire, United Kingdom and specialize in high quality textbooks across an enormous variety of subjects. We aim to provide a vast range of textbooks, rare and collectible books at a great price. Through our work with A-CET we have helped give hundreds of young people in Africa the vital chance to get an education. We provide a 100% money back guarantee and are dedicated to providing our customers with the highest standards of service in the bookselling industry.

Exposure: From President to Whistleblower at Olympus